I love it when life goes smoothly and all is well in my little world. Don’t we all want that?

I’ll start today’s blog post on a positive note. I just watched my church’s Sunday morning Worship Service online. I was blessed by a wonderful message from my pastor, Bro. Avery Dixon and amazing songs lead by Jonah Kyle and Courtney.

This has been a difficult post to write not just because there is so much to it but WordPress is really wonky right now and I’m struggling with using it.

So much has happened in the last few days that I have thought “When will it stop.”

I’ve shared a little about my dental work. As of right now, I have four shark-looking teeth in the front and am hoping to have the four permanent teeth ready to put in this Friday. The temporary teeth were made in two sets of two. Each of them was put in, fell out, put in and fell out.  Both of the first two dental visits were very long and tiring.  I could have gone back to the dentist a third time to have them put back in but it’s a long drive there and really what would the outcome be, probably falling out again. A different tooth lost the very old crown and will have to be pulled.  Then they will add that tooth to my partial denture so even when these four front teeth have permanent crowns I have more dental fun to experience. I am thankful for being comfortable with staying home in what feels like quarantine and if I must go out I can wear a mask and not look odd.

Our renter’s beagle, Droopy has become a problem for Buddy, for us, and for the other neighbor’s dog, precious Bennie. I won’t say more about it but we asked for him to take Droopy to his mother’s house in Mississippi. His truck has been at the repair shop for three weeks, at least, Since he didn’t have a vehicle, he had not been able to reach his mom in a long time and we wanted him to take Droopy there, I offered him my car to go to Mississippi to bring the dog to his mom’s house. The rest of this story is next.

My car, the Nissan Maxima I bought a couple of months ago, has a new alternator, new tires, and a new battery which took Chip a lot of work to accomplish.

When I offered my car to our renter to go to Mississippi I thought it was running fine. Well here’s what happened.

About 2 hours from here the radiator popped and the car overheated and stranded him on the side of the highway. He didn’t think it was something that could be fixed on the side of the road so a towing company was called and my heart almost stopped when we heard how much it would cost to have it towed here. $430.  Around three hours later my sweet, disabled car was delivered to our driveway in Amite.

Then the story takes some odd turns in the middle of the night…..  It started up when it the towing company dropped off and Chip took it for a ride to see how it would do and it shut off again about a half-mile from here.

Here it is on the side of the road the second time and with all the cows visiting it!

It would not turn back over after a couple tries and then it did turn over it revved up great but then died. Chip walked home from where it was stranded and he determined that it had a bad battery! I put the original battery on a charger and it held no charge so this morning at 7:30 I bought a new one from Walmart. The battery did not fix the car at all the tow company in a tow truck just dropped it back off in our driveway! The oil has recently been changed and he was not quite sure that there’s water in it but I’m not quite sure that there are not worked most of the night trying different things and going to Walmart to get a new battery for it. Our Walmart is about 20 miles from here and he went there twice. There more to this part but it’s now Wednesday morning and I don’t remember it all.

In summary, my car was not only towed home from Mississippi but was then towed home after stranding Chip on the side of the road. Thank goodness that one was under $100.

Then my absolutely wonderful brother-in-law and sister offered to have the car towed to a repair shop that they really trust. Their kindness and generosity made me feel so loved and cared for. I couldn’t thank them enough for that. Good old Nelly (what I originally named her thinking we’d have a long-term relationship) was towed to Northlake Auto. My brother-in-law met the car there and the shop owner reviewed everything and determined a head is cracked and it needs a new engine When my sister called with an update on what they found. I could tell she did not want to tell me that awful news and she even said my brother-in-law is as sick about this as I am.

The auto repair shop recommended that we contact peddle.com to see how much they would give me for the car as is.  I wasn’t happy with what they offered so I decided Facebook Market place was the way to go.  When it was posted on MarketplaceIhave had around 100 inquiries in less than 24 hours. It’s been crazy trying to respond to each of those people. Chip took over the Marketplace response aspect this morning and when Nelly just arrived back at my home in Amite via another tow truck ride he took and posted several interior photos.

Here are photos of each time the car was either towed to here or away from here. I think we are missing one photo. 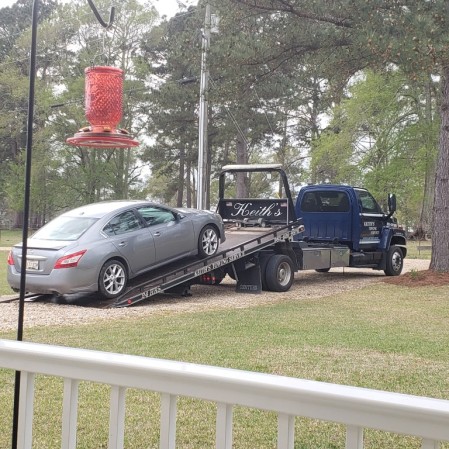 I rarely let things stress me out. I realized this morning how stressed I was getting over this and that I had not put it all in God’s hand to resolve. I have done that now and can picture God smiling that I acknowledged I can’t resolve this, but He certainly can. And He will.

Out of all of the people that are interested one man stood out. Chip called him this morning and feels very comfortable about this being the right person to buy Nelly. This potential buyer is coming here from Mississippi this afternoon. Hopefully, Nelly will be sold for our asking price by end of today.

Roy’s truck has been a problem since we put it up for sale. It’s sitting right now in the driveway and only makes a click, click, click when the key is turned in the ignition. It’s been to two different auto repair shops, worked on by one, and checked out by the other after the first shop didn’t fix the problems. I may have to sell it as-is for very little but don’t want to do that until we’ve exhausted everything so I can sell it for what it’s really worth.As soon as my car is sold I’ll focus on Roy’s truck.

Chip just sent me this picture of Buddy. I thought it would be a nice way to wrap up this post! He continues to bring happiness to my life and I am so thankful for him.

Ya’ll have a blessed week! Rosalyn