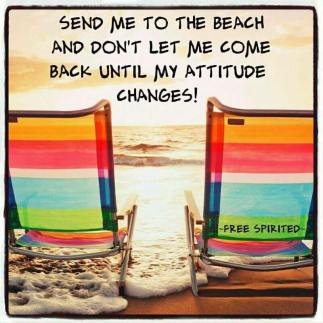 This is a blog post that most of ya’ll will have no interest in. I am posting it to help me remember and to refer to in the future.

Dr. Valdes told me to stop taking the dementia medicine Galantamine and diabetes medicine Jardiance. They could either be causing dehydration or seizures.

I have been so tired lately. I have been sleeping more than 12 hours each day recently. My brain is rather iffy in a mushy way lately.  I finally got out of bed at 11:30 on Friday when I started writing this.

I can tell as I start writing this that it will be a collection of short thoughts.

My appointment with the neurologist, Dr. Zapata went well. He agrees with Dr. Valdes that the episodes I was having are not seizures but are something else.  I would like for him to be my dementia neurologist from here on so the appointment was for that also.  He ordered a brain MRI, a carotid artery ultrasound, and bloodwork to go along with the EEG test Dr. Valdes ordered..

I had the bloodwork done last week.

The EEG brain wave test is scheduled for Wednesday.

The carotid artery ultrasound will be on Thursday before I go to an appointment with the diabetes doctor, Dr. Corey Majors about getting my blood sugar under control.

Then on Friday, I will have the brain MRI. I can’t handle an MRI without being sedated so my dear friend Cindy Vernon is going to take me there and back. Seems like driving around after being sedated is not something they like us to do!  I can drive myself to the other tests but I am thankful that Cindy is willing to help me get to the hospital for that one.

Early next week Buddy will be neutered and get his shots. He’s doing so well here. He’s put on weight. Hey, he is a Chauvin so putting on weight comes naturally to us! Chip put in an electric fence stopping him from running into the road to chase cars. He still has the freedom to roam our property, the pond, and playing with his doggie friends, but he no longer dashes out into the street where he could easily get run over. He’s not a big dog and the collar is fairly large but he doesn’t seem to mind it at all. Here he is after I wrap him in a soft blanket to get a good night’s sleep! 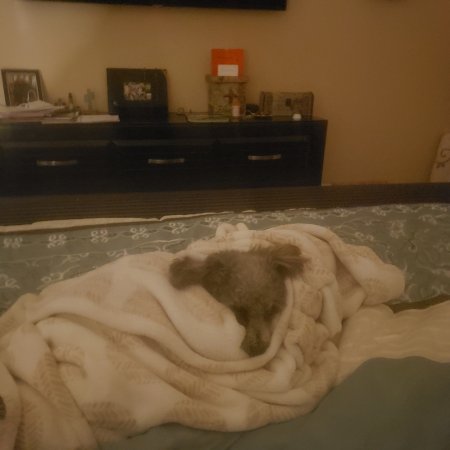 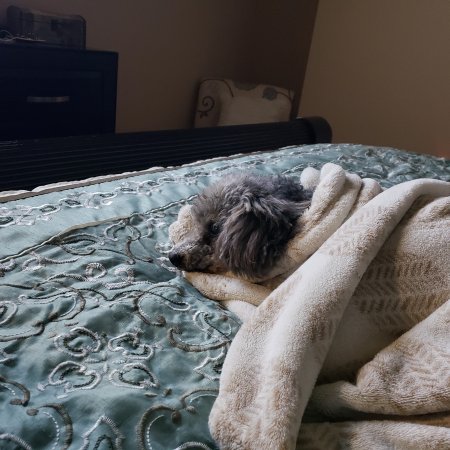 I’ve started painting/decoupaging and hiding rocks again.  I’m also decoupaging seashells to make into next year’s Christmas ornaments.  These wooden word creations in the photos below were painted and decoupaged with napkins. 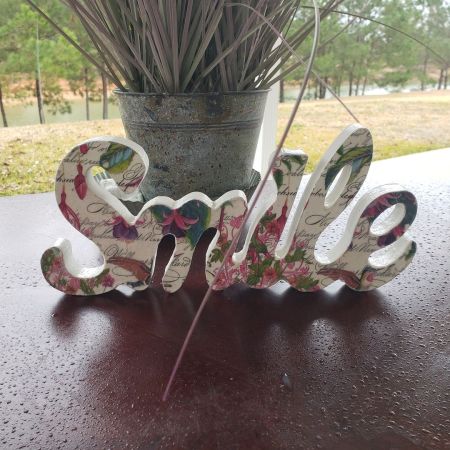 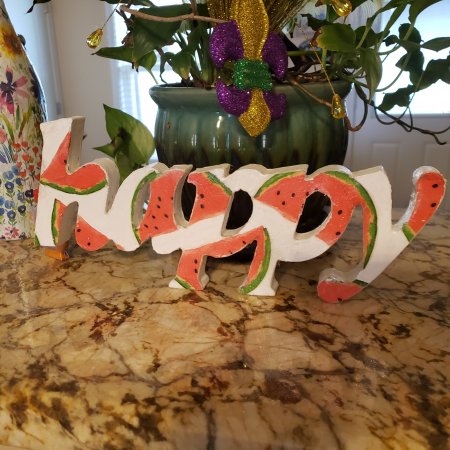 The four-shelf unit with plant glow lights was sold which freed up some space in my rock room! 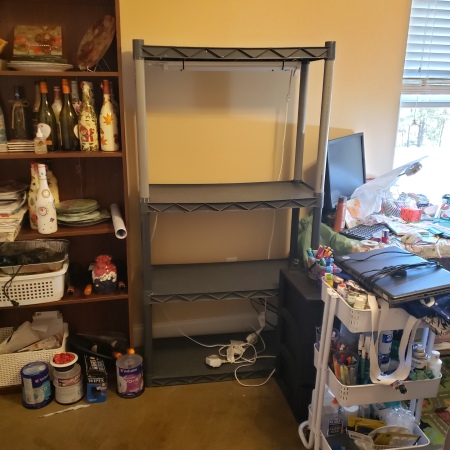 My sweet friend Cindy LeBlanc came to visit last week and so did the neighbors’ dogs. We sat outside to each lunch and visit. All five of us, two humans and three canines! The biggest canine is Enzo in the photos below. He is the largest dog I’ve ever been that near to. He is so sweet and gentle but absolutely huge! He normally 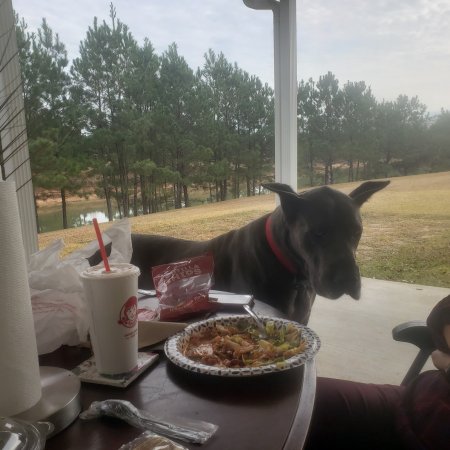 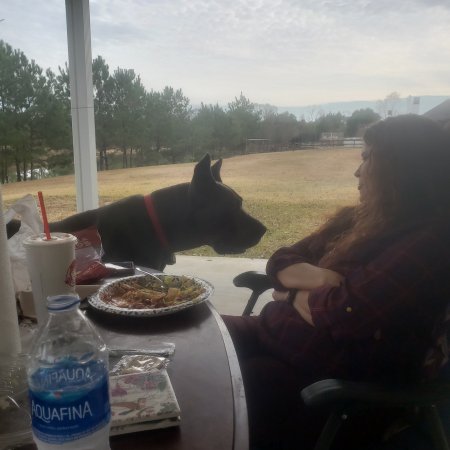 It’s the beginning of spring vegetable planting preparation. Chip is drilling holes near the bottom of this big pot I bought at the 15-yard sale a few months ago. My garden will consist of one big tomato plant and one cucumber vine. Both growing in this big pot outside the back door! 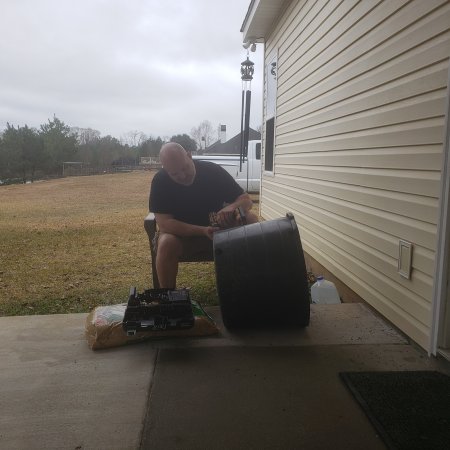 The neighbors across the street have been burning the grass all around our side of their property. This was the view from our front porch as the burning came close to our home. 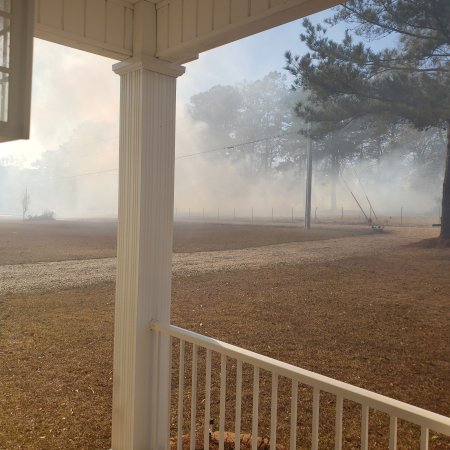 Our Saints lost last Sunday’s playoff game. As of now, we don’t know if our Quarterback Drew Brees will retire or play another year. I don’t ever want him to retire but after the injuries he’s had this year and the difference in his play this year compared with previous years, I sadly believe it may be time.

Ya’ll have a Blessed week, Rosalyn 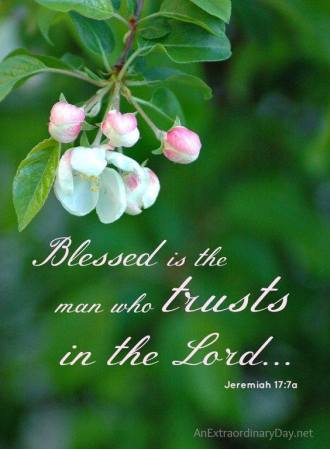