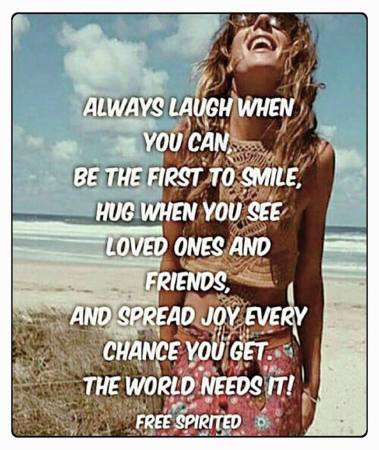 Okay, so the garden is doing some odd things and I’ve made mistakes. Some things are going really well and I’m learning! Again, not a blog post everyone will want to read but here it is! I just read it through one last time and it really is not tantilizing!

I wrote about my rock painting at the bottom so if you’re interested in that and not the gardening, skip to it!

At first I plated three garlic cloves inside with their papery shell on them and they sprouted, then transplanted them outside where they are growing well.  Then I  planted several cloves directly into the garden outside without the papery shell on them.  After a couple of weeks wondering why the second batch wasn’t sprouting I decided to watch a video about growing garlic.  I’ve watched several videos about growing garlic before but somewhere along the way my brain threw away what I learned and went with some alternative. Two of the peeled cloves are now sprouting so we’ll see how this goes as time goes on.  Garlic is a long growing plant and won’t be ready until early fall so stay tuned.

The rest of the other vegetable seeds that have sprouted were going through the hardening process I mentioned in the last post.  Roy feels like they aren’t as big as they should be at this point considering the seeds were planted two months ago. These include the cherry tomatoes, big tomatoes, bell pepper, cauliflower, broccoli, lettuce, okra, chives.

We found a four shelf hard plastic shelving unit at the local junk yard on Highway 16 and purchased some very low cost LED plant growing lights.  Roy put it all together and its now in the “rock painting” room where the grow light is programmed to come on at 6 am and go off at 10 pm every day.  That was just a few days ago so we don’t know yet how that will go.  I planted two cherry tomato and two big tomato plants from the “rock painting” room into the garden today to see how they will do there compared to staying inside under the growing light.

Three of the five cantaloupe sprouts growing down by the pond died.  I bought another cantaloupe, scooped the seeds out and dried them for several days. Last week I put all of them in the three plantless  mounds.  We’ll see how that goes! There is a 4 x 20 patch behind the blueberries that I’m thinking of experimenting by sprinkling more of the cantaloupe seeds there under the leaves.

After the last two nights of 39 degrees its all beautiful warmer temperatures ahead.

Sweet potatoes are doing really well but the vines are not quite at the point where they can be split from the sweet potato yet.  I did some research and since they can be put out in the garden as they are now I did it to day! Three have nice vines and a couple have tiny vines but they all went out.  Lots of mulch put around the tender sweet potatoes.

Bell peppers are doing really well but like the sweet potato they could go outside so I put four bell peppers (of the 20 total plants) out in the main garden to see how they do there. It’s a risk but I have exhausted my supply of patience waiting! The rest are patiently waiting under the growing light.

Lettuce, chives, broccoli, cauliflower were struggling and I’m hopeful the grow light will help them get to where they can go back outside for hardening.

The five original watermelon sprouts planted down by the pond are doing well and look very healthy.  The seeds I planted down there last week are beginning to sprout.

A bunny or something ate the tops off of most of the brussells sprouts.  The tiny brussells sprouts are still there and I’m going to leave the plants there to see if the sprouts grow bigger without the leaves.

The yellow onions planted in the main garden and the pond garden are all sprouting.

All of the corn seeds have sprouted and are between two to six inches high now!

All of the original potato plants are very healthy and growing well.  The second batch of potatoes that were planted a couple of weeks ago are not coming through the soil yet so I don’t know how they will do.

I piled pine straw on top of the militons and cucumbers and they are growing well now.  Only one of the five militons hasn’t sprouted yet but the others are doing really well and are attaching themselves to the fence Roy built.  About half of the cucumber seeds I planted are sprouting.  They are not tall enough to reach the fence yet.

I piled pine straw on top of the garlic, yellow onion, white potatoes, corn and four tomato plants that were just planted this week. It should help especially when the summer heat starts here in Louisiana and the ground gets dry easily.

The peanuts along the fence near the front road are all growing and have a few leaves already.  The peanuts down by the pond are not growing yet. One has sprouted but more should soon.

I have had a bad chest congestion and coughing for the last few days.  Roy was sick with it before me. Tried my best to say in bed and I succeeded a bit.  I want it to go away, doesn’t everyone when they are sick! I’ve been rock painting since I can just sit still while painting.  I have a bunch ready to go out and a bunch more on the work table getting ready for Easter.

The ones that are ready. The big blue M&M rock was hidden today in Kentwood.  I love the M&M rocks with a chunk taking out. They are quirky and I do a few large and small from time to time.

This is a new phrase I’ve started writing on my rocks. I think that saying will make anyone who reads it think about God for a minute which is the whole idea.  The second are a bunch that are ready to out.  If ya’ll want to contribute some 3 to 6 word evangelistic or just cute phrases that would inspire or make someone happy please send them to me as a comment.  I especially like the ones with words that have letter that can be colored in. 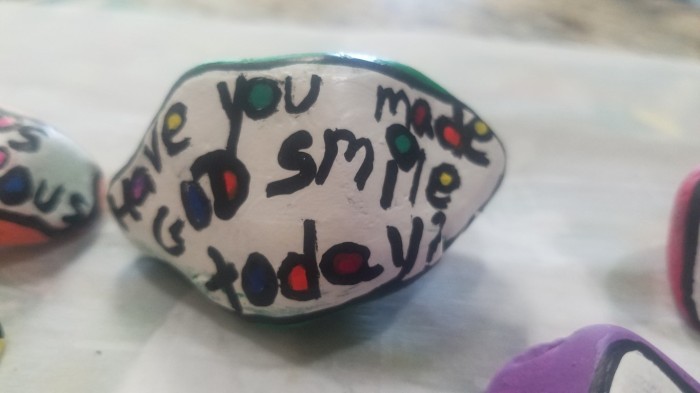 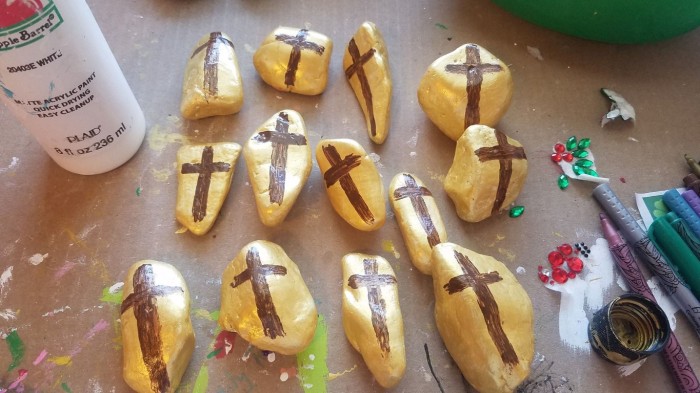 I started the Rosie Rocks Facebook group almost one year ago and we now have 73 members.  That means around 60 of my rocks that were found, the finder joined the group and posted a photo.  If you’d like to join or see the rocks that have their pictures posted check Rosie Rocks out at https://www.facebook.com/groups/1707652262651874/https://www.facebook.com/groups/1707652262651874/  I’d say that photos of about 1 out of every 50 rocks hidden wind up on the facebook group. I would LOVE for all to be posted but at least I know that most all are found and hopefully they put a smile on the finders face and meant something to their heart!

Ya’ll have a blessed week!