Thursday, July 2, 2015 – We arrived in Wyoming Tuesday evening, making our way to the Rawlins, WY Walmart for a overnight stay. We were given permission to stay overnight and went sound asleep very quickly.  A beautiful cool breeze came through the windows and I slept like a rock!   We drove much longer than we usually do in one day so that the drive today would not be overly rough.

We left Rawlins, WY in the morning and headed for Glenrock, WY where we are now staying for two night at Platte River RV Park. We’ve driven 1568 miles since we left Louisiana.  We plan to do nothing today and tomorrow but I want to share with you the adventure we had at the Cripple Creek & Victor Gold Mine.  It was the highlight of our day on Monday.

Okay, if you have watched the television show, Gold Rush you probably know who Parker Schnabel is (other than having read about him yesterday!).  You can understand my comment when half way through the tour I said to Roy “This must be what it’s like to live Parker’s life.”  We were in the middle of an active mining site with bigger than ginormous dump trucks all around!  If you don’t get it, then watch the show!!! 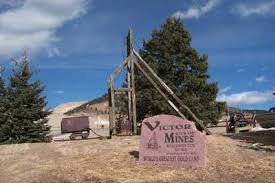 After leaving the Heritage Center, we headed over to the Victor Lowell Thomas Museum where the mine tour starts.  It is only $7.50 per person for this tour which was quite different from the other tour but this mine could have charged double what they charged and it would have been worth it.

This tour takes 13 people in a nice air conditioned bus from downtown Victor, CO to the active mining site.  The tour guide was exceptional and we had three young boys with us which made it even more interesting with all their questions!  We all watched a brief safety video and then put on our bright yellow and orange safety vest, safety glasses and bright yellow hard hat. We were all so cute!!

Here’s me waiting for the tour to start in pretty little downtown Victor, CO.

Here’s a little information about the company that does the mining we saw. Cripple Creek & Victor Gold Mining Company (CC&V) has been mining gold in the Cripple Creek Mining District since 1976, followed by large-scale surface mining, which grew with the start of production at their current mining operation, called the Cresson Project.

Engineering for the modern Cresson Mine began in 1993.  CC&V is a low-grade, surface mining operation. The majority of

ore is treated using a valley-type, heap-leach process to recover the gold. According to the internet, hea p leachig is an industrial mining process to extract precious metals, copper, uranium, and other compounds from ore via a series of chemical reactions that absorb specific minerals and then re-separates them after their division from other earth materials.  To learn more about heap leaching you can go here https://en.wikipedia.org/wiki/Heap_leaching

Our tour took us all around, stopping first where we could look down into the mining pit.  We also saw up close one of the massive hauling trucks that are used.  We got to climb up in it (lots of steps) play around and take pictures of and from the truck and from the fence overlooking the mine it.  Here are some of the pictures!

Then we headed down to where all the action was taking place. 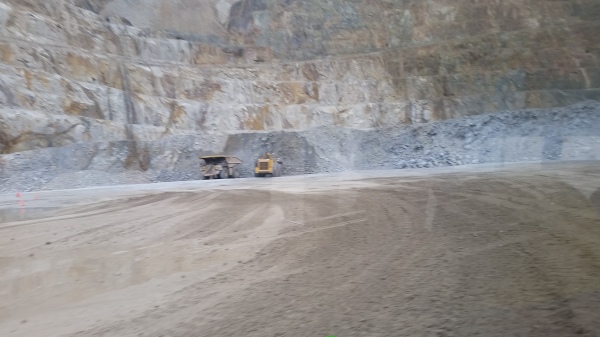 That ends our tour of this massive, impressive and totally cool gold mining site.  Both of the tours we took were very different but gave a great overall view of mining in the past and present day.

Tomorrow I’ll share our observations about Colorado and a bunch of pictures Roy and I took of our trip from Colorado into Wyoming.  Totally different states scenic wise. We are inching towards the Grand Tetons and Yellowstone.  If anyone knows of a great boondocking location near or inside Yellowstone we’d love to hear from you!