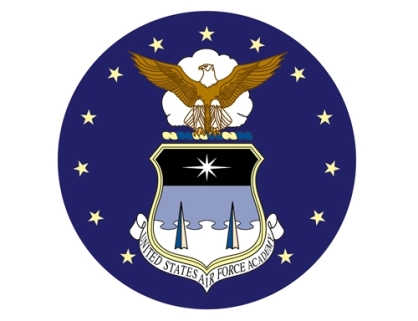 Tuesday, June 16, 2015 – After all the excitement of Pike’s Peak we thought we’d take it a little easier today – so we toured the United States Air Force Academy.

The Air Force Academy is unique in its dual role as both an Air Force installation and a university. The 10th Air Base Wing provides logistical, medical, fire response, security, civil engineering, family care and medical support across the 18,000-acre installation for a community of approximately 25,000.

After showing our Picture IDs we were allowed to enter the base.  We headed for the Visitors Center where we watched a 20 minute video about the Air Force Cadets four year experience here.  I didn’t know it really is a college experience where they come out as Air Force officers trained in a specific area.  Lots of wonderful information and I’m glad we chose to watch it. 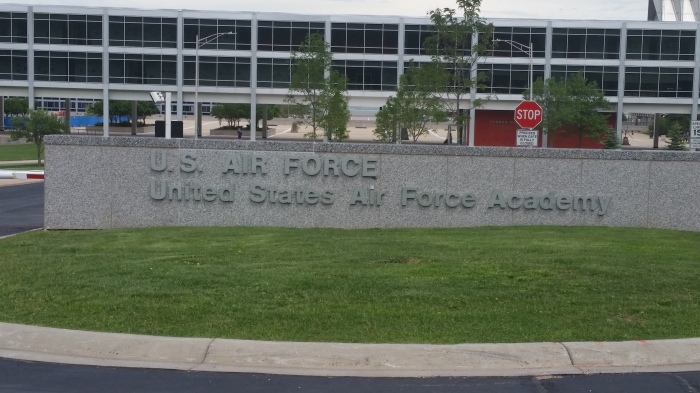 The Academy’s stated mission is “to educate, train, and inspire men and women to become officers of character, motivated to lead the United States Air Force in service to our nation.” It is the youngest of the five United States service academies, having graduated its first class in 1959. Graduates of the Academy’s four-year program receive a Bachelor of Science degree, and are commissioned as second lieutenants in the Air Force. 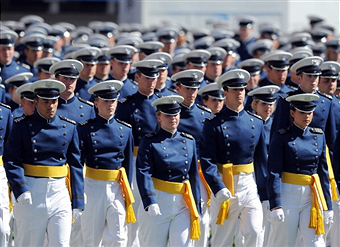 To gain admission, candidates must also pass a fitness test, undergo a thorough medical examination, and secure a nomination, which usually comes from the member of Congress in the candidate’s home district. Each class starts with around 1200 cadets with around 1000 graduating.

After watching the video we toured a little museum they have and also saw a couple of live Falcons being held by two young men who were explaining about them.  We walked through the gift shop and then left to see the rest of the campus. 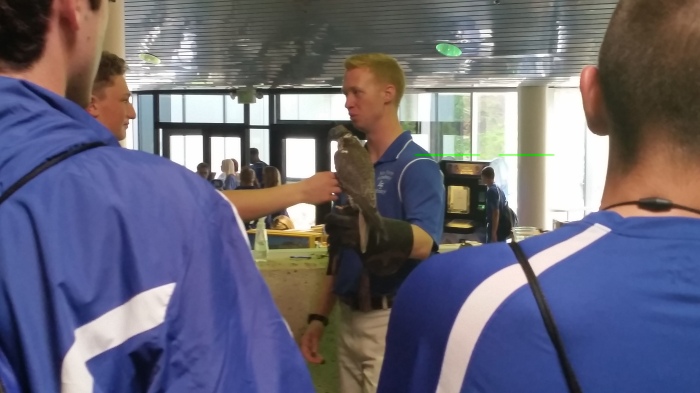 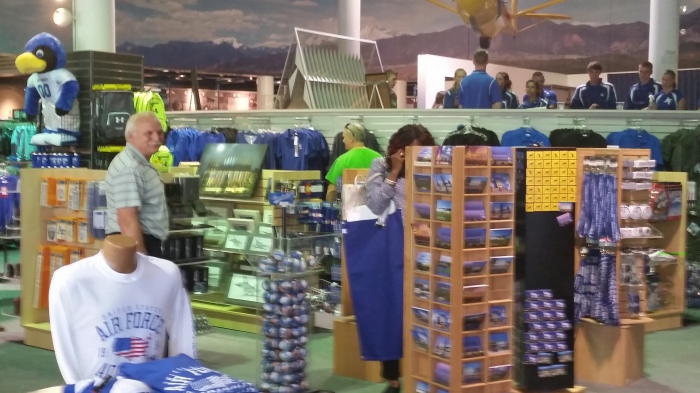 It is a beautiful campus with picturesque views of the mountains surrounding it.  The camp covers 18,500 acres on the east side of the Rampart Range of the Rocky Mountains. This has to be such a huge blessing for the young men and women to live here and learn all they do during their training. 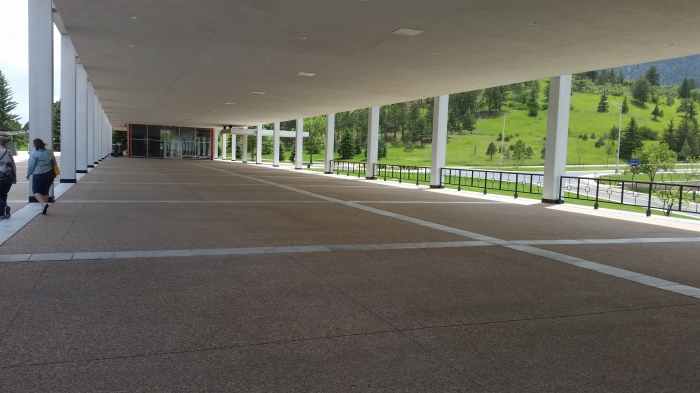 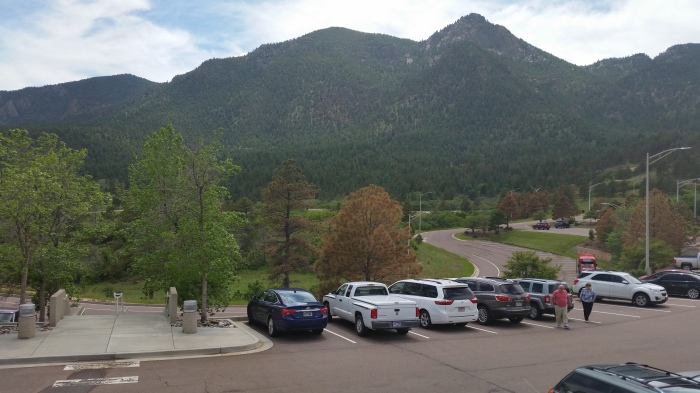 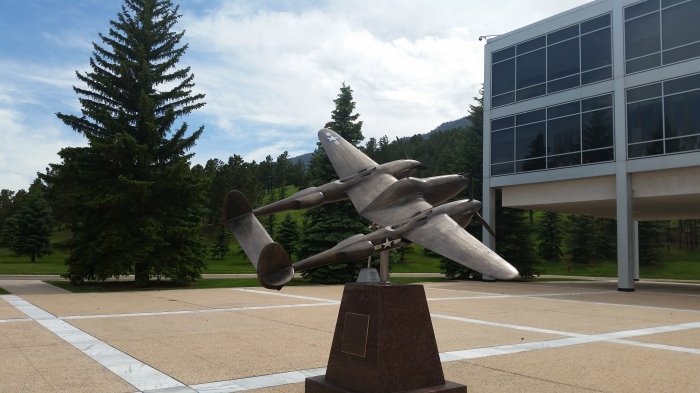 The next four are panoramic pictures.  To see them better click on each one.  Then click the back button to bring you back to the blog.

The highlight of our visit was when we went to the Cadet Chapel.  Not knowing any better we toured just the main portion which is the Protestant Chapel.  We learned later there is also a Catholic Chapel, Jewish Chapel and Budist Chapel within the huge structure.

Both the exterior and interior are unusual and inspiring.  I can imagine that worshiping God there must be wonderful!  The exterior of the chapel is a focus point on the campus. 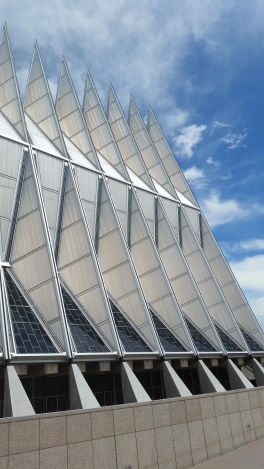 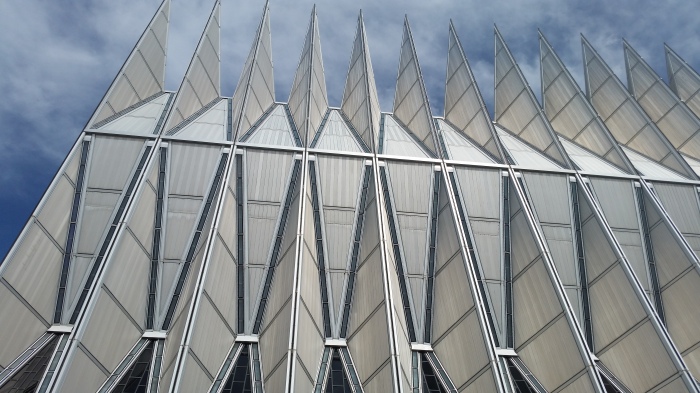 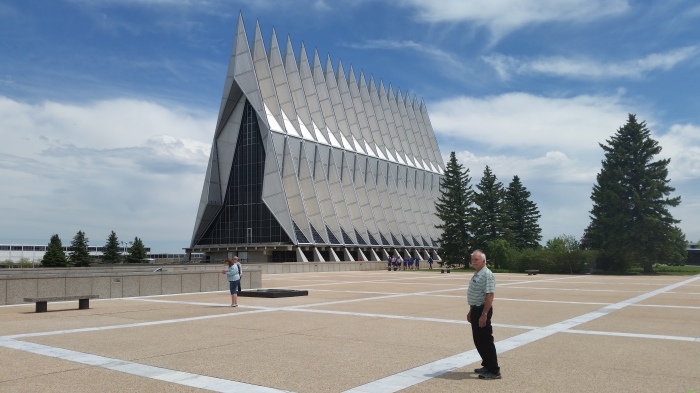 The pictures below only capture a bit of the overwhelming glory of the interior. Information about the stained glass, the cross and the organ are below.

The Cross made of cast aluminum is suspended and is 46 feet high, 12 feet across and weighs 1200 pounds. 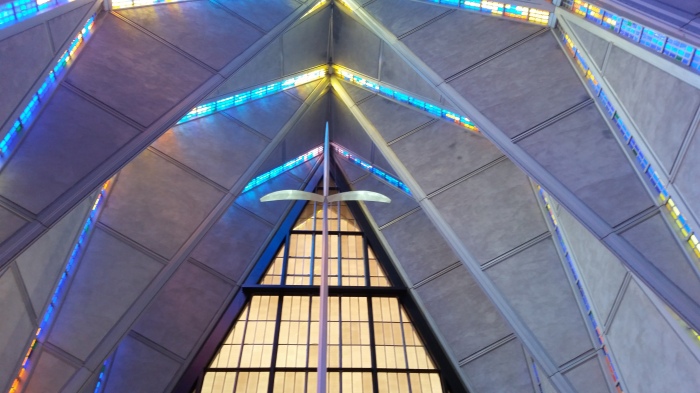 The organ has 4,334 pipes ranging in size from 32 feet high to merely pencil like size. 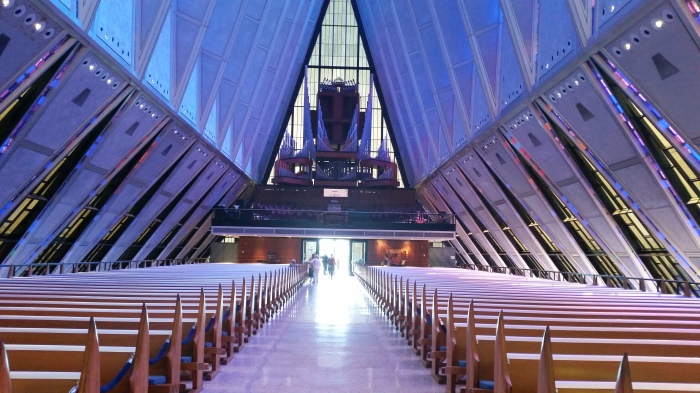 The colors in the stained glass graduate from dark to light representing coming from the darkness into the light of God. 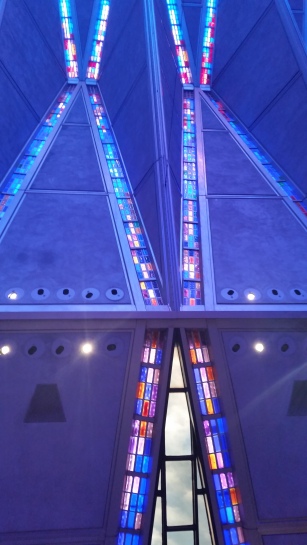 Other chapel pews and exterior doors: 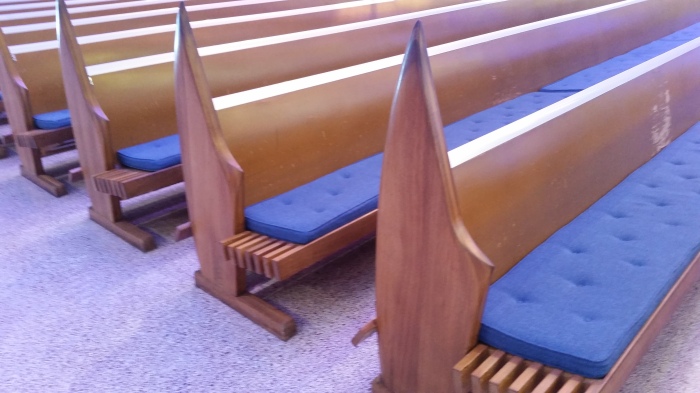 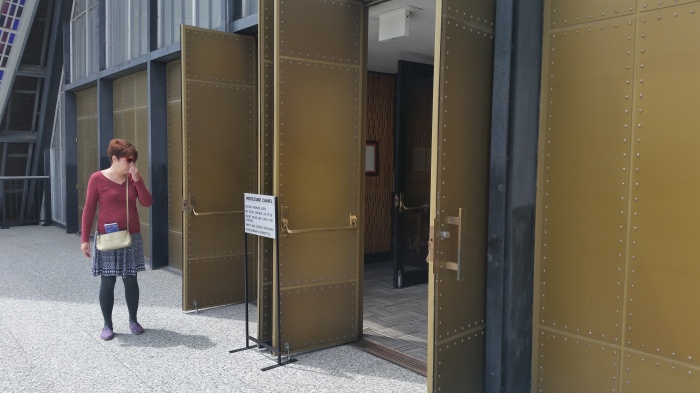 Roy had a little fun taking photos with some of the bronze statues on campus. 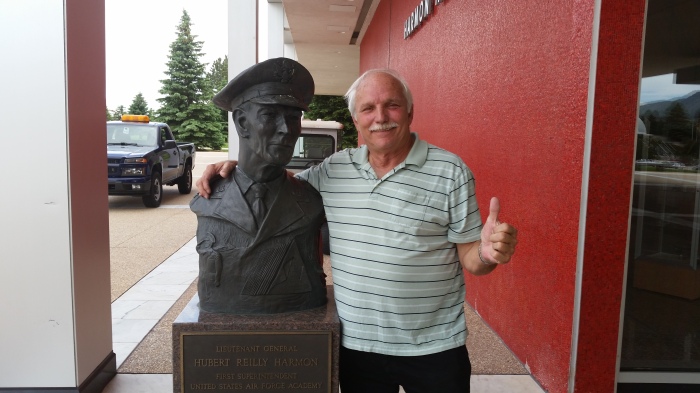 Roy was thoroughly taken with watching a plane pulling a glider through the air over the chapel.  You’ll have to look closely in these pictures but if you do, you will see the plane and the glider.

This was the perfect outing for two old folks exhausted from their adventure the day before! The temperature today as in the low 70s and sunny!  We really see why people loving living here in Colorado – now that we’ve found the mountains!!

and Garden of the Gods 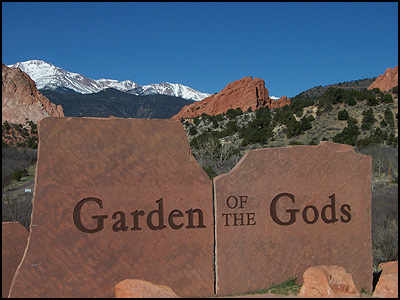 We’re both enjoying having some quiet time this evening and relaxing a bit!