The high here was 86 on Tuesday which was a shocker to us. I’ve heard it’s been around 100 in Louisiana for a few days so I shouldn’t complain.  However the cabins and the lodge do not have a/c because it’s pretty much never needed.  The lodge temp showed 84 but the kids don’t mind since when they come in they are wet from swimming.  I was told this is unusual and since today’s high is 77 I’m hoping they are right.

Our baby robins that reside outside our RV in the rear continue to grow and all have feathers now.   They were really kind of ugly at first without feathers.  It’s been years since I’ve actually witnessed a birds nest with the eggs and then hatching and growing.  I’m really enjoying seeing this miracle of God’s.

top their vehicles.  Roy and I couldn’t figure out  where they were going to surf around here.  Yesterday I found out why they have them when I saw three of them paddling on the surfboards out in the water.  It seemed to be a mom’s get away from the children time and I say amen to that!  The mom’s are so patient and play with the children all day while daddy’s go off fishing so they deserve some regenerate time away!  I remember when we had a pond and a paddle boat, Roy and I would jump in it when we got home sometimes and paddle to the middle of the pond.  It was far enough away to where we couldn’t hear Chip and our oldest son whose name he asked us to remove calling to us and they couldn’t hear us trying to have some alone time conversation.  They learned that trick and would pull it on us sometimes.  I loved those growing up years with our sons!  I 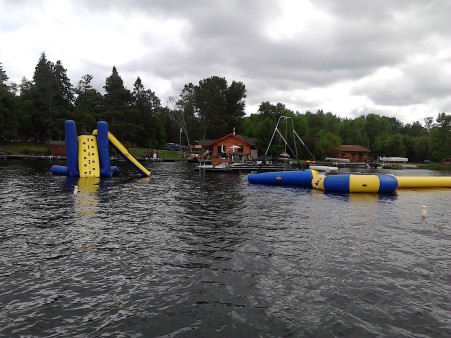 was heart broken when the paddle boat broke and we didn’t get another one!

One day this week Roy took the hydro-bike out by himself and took some pictures of the resort from out in the water.  The second picture is of me taking a picture of Roy!

The Pine Ridge gift shop is maybe 3 miles from here.  We’ve visited there and love the choice of things they have.  We’ve seen the sign outside that says Pies on Tuesday.  We keep forgetting to go there on Tuesdays but this week we remembered.  We hopped in the car and drove over there around 1:30 on Tuesday only to learn they sold out around 9:30 in the morning.  But we learned we could order one for Thursday and pick it up when we want to.  We chose a custard rhubarb pie which we’ve never had before.  In case she doesn’t have rhubarb we chose a blueberry pie.  Since everything around here costs more than in Louisiana I shouldn’t have been surprised when I heard it would be $14.00.  Can’t wait until our day off tomorrow to pick it up and enjoy it!

The mosquitos and gnats around here are causing Roy all sorts of problems.  There are also may flies and black flies and he seems to be a prime target for all of them.  We can be sitting together and

they will attack him but barely bite me.  I’ve always thought I was the sweeter of the two of us but the bugs don’t seem to think so!  Roy’s ordered a special spray off the internet that doesn’t contain deet because it burns his skin.   We searched Menard’s (the big Lowe’s type store) in Duluth and found a couple of sprays to hold him until the supply he ordered comes in.  His problem, along with itching all the time, is that when he scratches (since his skin is getting thin – it’s that old age fun thing!) it bruises him and turns his skin purple.  The two pictures of his arms show you what he’s dealing with. I think they look like something from a horror film but I must report he’s looking better this week.  The biting seems to have eased up some and hopefully he’ll be able to tolerate it until October 1st!

While I was at work today I realized that I now have memorized how much we charge for leeches, worms, shiners, rainbows and chubs and never in my life would I have known anything like that.  Yes they do fish with leeches (the blood sucking things .  I’ve gotten use to that now after finding that a lot of good fish are caught on those things.   I haven’t touched one however and hope I’m never required to do so!

We’re looking forward to having Thursday and Friday off and going into International Falls.  We may try some fishing in one of the resort’s boats tomorrow afternoon.  Decisions, decisions!  I’m liking these kinds of decisions.