We watched the movie Fargo last night which seems to be a spoof of the way people in Minnesota talk.  I wouldn’t recommend anyone watching it since there’s very graphic sex, lots of murders and filthy language.   If you’ve seen it I want you to know it’s an exaggeration of how they talk but basically that IS their accent. We watched it because of the Minnesota connection. That part was very funny and I do see the accent of some of the people up here in the accents of people in the movie.  They say a lot of yah for yes which is actually really cute.  They of course don’t say ya’ll and sometimes that has to be explained to them when I say it!

With Saturday came the arrival of guests and for the first time all cabins have occupants.  They aren’t allowed to arrive until 4 since we need the whole day until then to clean up inside the cabins and the grounds after the guests depart.  None of our motorized vehicles are allowed to run during the guests stay so things are very peaceful here.  This means that Saturdays between 8 and 3 everything is running to get it all accomplished.  Roy and I finished our morning work between 1 and 2 so we were in our home when they all arrived at 4.  There were trucks with boats attached lined up down the road as far as we could see.  It was like a boat parade on land. I didn’t get my camera out in time to take a picture of all the boats but here’s a couple of pictures showing some of the parade!

Two of the cabins can hold several families so there were multiple boats for these cabins.   Our guys working Saturday evenings get the extreme privilege of launching every single one of these boats.  Our dock slips are all filled and some of the guys even ventured out to fish yesterday evening in the high winds and rain.  These are serious fishermen!  Roy works on Friday evenings which is when most of them pull their boats out of the water and he’ll have the privilege of doing that!

Roy’s main job on Saturdays is to cut grass including the grass along the road leading into the resort.  First the lawn mower wouldn’t work this Saturday, and then he got it stuck having to pull it out, and then he got it all cut before the guests arrived.  And all of this in the pouring rain and a high of 45 degrees!  The weather here has been unusually cold for this time of year in Minnesota.  Most days we walk out the door to mild sunny weather with low humidity!  Yeah for a northern summer!

We had our Saturday evening meet and greet BBQ and a lot of the guests attended.  It’s a really nice time for us workers to mingle with the guests and get to know them a little better so when we see them during the week we can wave and greet them by name.

Rick and Jim put one of the pontoon boats (party barge) into the water today. That’s what I want to get out in the lake in.  There are four pictures of this starting with them going in front of our RVs with it and then getting it into the water.  They have exercise bike’s that go out in the water too but I’m waiting for some warmer water before trying that, just in case I fall in.  It was 31 last night and is predicted to be 32 degrees tonight.  Crazy June weather.  Our grass seed is starting to come up and before long we’ll have a real lawn to play in!

We fried the first of our fish, both Northern Pike’s, tonight and they were delicious.  Roy fried them and some fresh potatoes we cut into circles.  What a good meal and we ate it outside in the cool evening air.  Our neighbors came over and cooked some of their Northern’s with us after we cooked.  Our new induction cooktop works great for this, is easy to clean and small enough to fit on a small table for cooking.  Roy went down the road and found one of those big spools they put cable on and brought it home so we have a new table outside for cooking!  It’s wild the things you “find” that can be usable.

Roy and I left the resort for a while this afternoon and saw some of the nearby resorts and state parks.  We drove through 6-7 of them and Northern Lights is by far the nicest resort around here.  We took lots of pictures and will tell you about our adventures including the pictures tomorrow.

The screen for the front window of our RV came in but they sent us the wrong one.  They sent us the Bengal Tiger which we do like since we’re LSU fans, but the other one goes with our RV better.  They were nice when we called them and told us to keep the wrong one and they’d mail us a new correct one.  These things aren’t cheap, so I was surprised they said that but the new one is on its way to us and for now we have Mike the Tiger on our front windshield. 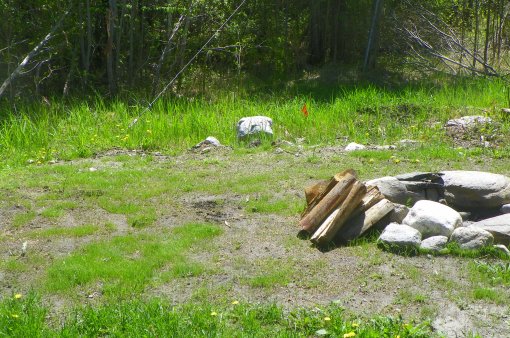